Melinda & I are both still recovering from the flu and are going a bit stir-crazy (maybe that’s a sign of recovery?). 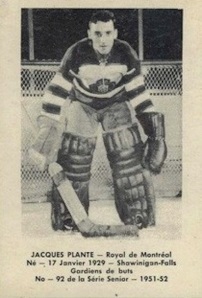 Part of my stir-craziness was some Internet-surfing involving hockey cards, a big part of my childhood. I got to thinking of this man I used to trade with who also was a gifted artist, a man named Carlton McDiarmid, who illustrated some pretty impressive postcards for the Hockey Hall of Fame.

Carlton’s and my biggest trade came when I was a senior in high school in 1981 and home for a couple of weeks with bronchitis. I traded him a slew of hockey postcards for a set of 1951 junior hockey cards that were pretty darn cool. Of course, my cards are long gone, sold in 1992. The most sought after card in that set, a perfect one of Jacques Plante, photo here, sold in auction last summer for something like $4000.