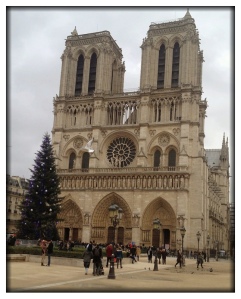 I went for a long walk this afternoon, my destination being the Jardin du Luxembourg. I passed by Notre Dame on my way, interested in checking out what might be going on there on Christmas Eve. As you might imagine, quite a lot.

I stopped to snap some pictures at about 3pm. As you can see in the lower photo, there was a long line of people waiting to get in for a regular tour. I’m not sure how they end the tours, but they have their first Christmas mass scheduled at 4:30, followed by a family mass at 6pm. There is an international mass at 8pm, an 11pm mass with carols, and then a midnight mass, as well, if I understand things correctly.

Hmmm… Come to think of it, maybe those folks going in at 3pm were getting inside for the 4:30 mass. Given how many people come to the midnight mass, so many that they set up a huge screen outside the cathedral for everyone outside to watch, it wouldn’t surprise me. We’re talking about heading over to get a feel for things during the 11pm mass, which is in about 4 1/2 hours.

Anyone else heading out to a world-famous cathedral on Christmas Eve?