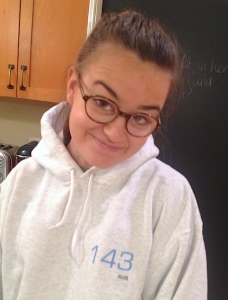 There is one letter in the word “I,” four letters in the word “love,” and three letters in the word “you.” 1-4-3, I love you. So said Mr. Rogers, he of the famous American children’s TV show, in this great article in Esquire Magazine from 1998. So moved by this article was I that I made it a featured part of PSCS several years ago, and created an entire 143 campaign that featured buttons, T-shirts , and hoodies. It was a big hit that still has its fans.

So note Celeste here in her new 143 hoodie. My mom passed it over to our house as it was just too big for her. I offered it to Celeste last night, and tonight I discovered her wearing it. It looks pretty good on her, don’t you think?