The title of this post comes from this quote from Charles Kuralt:

“It does no harm just once in a while to acknowledge that the whole country isn’t in flames, that there are people in the country besides politicians, entertainers, and criminals.” -Charles Kuralt

I’m finding the quote to be centering for me, acknowledging that the privilege I have as a self-identified heterosexual middle-aged white American man makes it a lot easier for me to find balance than others. Still, with this privilege and in finding my center, I think I have a responsibility to contribute to the country working to find its center.

I fear that if we stay polarized or get even more polarized, we are going to individually become versions of our worst selves, and collectively we are going to become a mean, dispirited country.

So here’s what I think we need to do:

“Be the change that you wish to see in the world.” -Mahatma Gandhi

When I worked with children, I would tell them that when in a conflict their first job was to not make the situation worse. Their second job, if they were capable, was to make the situation better.
That’s hard to do, I know, and nearly impossible when we feel we are under attack.

What can count as a positive message?

Anything that makes you feel good that doesn’t harm someone or something else. For me, I look for the ordinary kindnesses that take place around us all the time, counting each as a positive message in my ledger. To make this work, though, I need to take the time to consciously recognize them.

Here are just a few of the positive messages I’ve benefited from recently, either by doing them, seeing them happen, or having them done for me:

Here’s another quote in support of what I’m trying to communicate here: 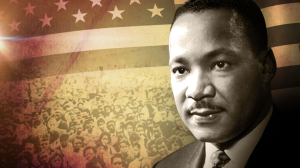 So the wisdom is out there. Can we make use of it?

Back to Charles Kuralt for a second. He was a reporter for CBS news who himself grew a bit disillusioned with the negative. In the 1970’s he was granted permission to take a mobile home and a camera crew to travel the back roads of America in search of good news. His program “On the Road” followed, a positive news segment that lives on long after Kuralt’s death.

A few years ago I found a DVD set of the old “On the Road” series. Compared to today’s slick production and fast edits, the show is quite quaint. But that’s part of its charm.

One of my favorite stories was about a man named Jethro Mann in North Carolina who fixed up broken bikes so every kid in town could have one. When Mann died in 2013, a local TV station referenced Kuralt in their story, which included an adult banker who credited Mann for serving as a positive male role model when he was a small child.