Most readers of my blog are aware that Melinda, my wife, and I took our daughters, Chloe & Ella, to live in France for a year back in 2010-11. We had been granted a sabbatical from the school we had founded and used the opportunity to provide our family some wonderful experiences in a different country. 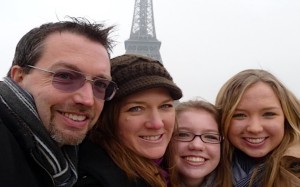 Among the things we got to do was travel. In the spring of 2011, we went to southern France and stayed in the city of Nice. Although it’s pronounced like the English word “niece,” this didn’t stop me from telling my family, and on multiple occasions, how nice I found Nice, purposely mispronouncing the words.

Near the end of our year in France, we traveled to Normandy in northern France at the invitation of the Bertail family, people who lived around the corner from us and had become great friends. Melinda and I rented a car for this trip and for the first time in our lives experienced a vehicle with GPS.

Let me just tell you how infatuated Melinda and I became with this nifty little tool. It’s like driving and playing a video game at the same time, which, incidentally, I’m not advocating anyone do on a literal basis… 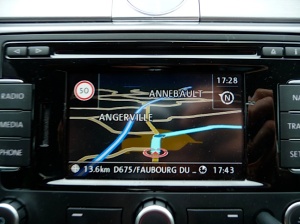 So, anyway, there we were, driving in Normandy to our destination and up on the video game, err, GPS screen came the word “Angerville,” which turns out to be a small town in Normandy (click on the photo here to see it better).

Chloe piped up from the backseat, “We spent some time in Nice, why not Angerville?”

Good one, Chloe! A real chip off the old block!

Turns out, though, that it never really worked into our plans to make a stop in Angerville. We were overdue and it was getting dark. Still, I kept picturing the four of us next to a sign of the town name, each of us with an angry scowl on our faces.

So, yeah, it’s probably best we didn’t go to Angerville back then. I mean, we probably go there metaphorically often enough, right? Think about it. Wouldn’t YOU rather go around Angerville than making a stop there?