For our last full day in Paris we continued to make excellent use of our week-long Métro passes. The Paris Métro is truly a remarkable thing, an engineering marvel. There are 16 lines and over 130 miles involved in it and it serves 4.5 million passengers per day. Fascinating, I know. Here’s how it works. You head down a staircase in one part of the city and then follow directions to the correct line, navigating these underground tunnels with hundreds of other people, 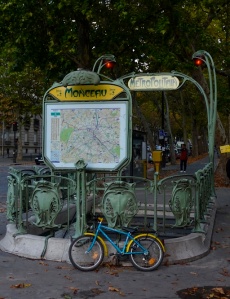 Still, I think the whole system is a scam to keep Parisians thin.The way it really works is like this. People go down some stairs, just like I said. That’s the warm-up exercise. Then you wander around an intricate series of underground tunnels designed to give you an incredible workout. Some people get behind you and step on your heels, encouraging you to pick up your pace for a better workout. Others slow down in front of you, worried that you are going too fast and will burn-out. It’s like interval training. You wander around in these tunnels, following signs to trains that you think take you to your destination. In reality, these trains just go around in circles for a while, giving you a little rest. Then you get out and follow more underground tunnels until you reach your destination. You go up some stairs to finish your workout and there you are. Man, if people knew they had really walked from Montmartre to the Eiffel Tower they’d be really mad. So the city planners got the psychological thing down pat, too.

Part of what’s cool about it is the art involved. Some of the stairways are really attractive, like the one in this picture I took today. Inside some are quite nice, too, and the so-called street performers who entertain are a nice touch. I wonder if the occasional urine smell is designed to keep people moving. It wouldn’t surprise me. Like I said, they thought of everything.