In some ways it’s hard to believe that today is Thanksgiving. Chloe and Ella both had school and all the stores were open regular hours. Of course, an American Thanksgiving means nothing here in France. But for our family, it is important. 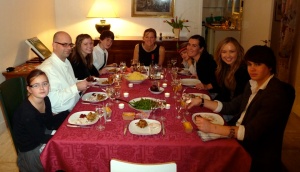 And once we met Christine and she mentioned how she hoped her family could experience an American Thanksgiving, there was never any doubt in Melinda’s and my minds that we would be doing something significant today. And as I mentioned yesterday, Christine ordered and picked up a turkey. All Melinda and I had to do was put a few things together.

I’m posting late because our dinner just wrapped up. Given everyone’s work and school schedules, we were operating under more of the French evening timeframe, meaning dinner took place around 8pm. The festivities, as far as I’m concerned, began when 8 year-old Claire (9 on Monday) showed up just past 6pm in full American Indian regalia with her beautiful homemade name tags for the table.

I took today’s photo just before we began eating. I don’t think Norman Rockwell could have painted anything more American, even though the setting is in France.