I did NOT title this post because Stephanie left France today. While it is true, I accompanied her by tram to the center of town at 9am today so she could catch the shuttle to the airport. 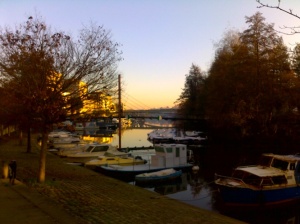 And it’s true that she has returned to Spain, having travelled by plane to Paris and on to Madrid where she is staying tonight (and, hopefully, salsa dancing). She and I had a great time yesterday taking the tram and a bus to get around Nantes in the sunshine. She got to know Christine and pick her brain about what it’s like to have been raised in the United States, marry a Frenchman, and live in Europe for 20 years. So, yes, we had a wonderful time having her visit us, so her departure has nothing to do with today’s beauty. The beauty in the day came in the form of sunshine and a temperature that approached 50 degrees Fahrenheit! That is something, especially after days of freezing temperatures, wind and rain.

I took today’s picture a few minutes after bidding farewell to Stephanie. It was such a nice morning I decided to walk most of the way home from the center of town. I stopped at various places and took some pictures, this one being among my favorites. Ah, what a difference a little sunlight can make. I highly recommend it.