Yes, so I’ve been hinting at this incredible dinner we had with the Boudeaus last Tuesday night, the one in which to get to the restaurant we had to put Romain and Manon in the back of the magic car, the Boudeau taxi. 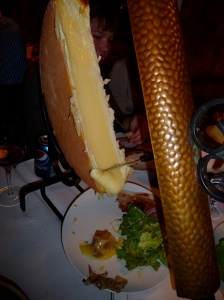 Earlier in the day, Laurent and Frédérique pointed out the restaurant to Melinda, Chloe and Ella from high above it, on the ski slopes. Location-wise, it’s about halfway between Les Carroz and Flaine, kind of out in the middle of nowhere, although there is a ski lift next to it and you can ski through a tunnel under the road right by it, too. The restaurant is called Chalet Les Molliets and their speciality is cheese.

Chloe and Ella ordered what I would call traditional fondue. They were served a huge basket of bite-sized pieces of bread and plates filled with thinly sliced meat. Then a big pot of bubbling hot cheese was delivered and placed in front of them. They would dip the bread in the melted cheese, transfer it to their plates and then mix in the meats as they desired. Laurent, Frédérique, Melinda and I all ordered the same thing, the name of which I cannot remember. It involved having a HUGE bowl of cooked potatoes delivered, along with plates filled with thinly sliced meats and trays of cheese. A massive burning hot metal device was placed in front of us on our table, a cheese tray fitting perfectly in a slot on its side, one at a time. So we’d take turns melting a layer of cheese on our trays and then pouring it on our potatoes, meats and bread. As the meal ensued, we got warmer (it gets hot in the restaurant with all these burning hot cheese melters on people’s tables) and fuller.

Today’s photo features the raclette cheese and its heater, what was ordered by Manon and Romain. That’s the heating element on the right on the cheese, momentarily moved slightly away from the heater so Romain can slide some melted cheese onto his plate, on the left.

I’m getting hungry just thinking about it, and am imagining the horror on my brother’s face when he reads this post. Funny, I feel a strange satisfaction considering both of these things.