First, we figured out what that wet stuff falling from the sky yesterday was. It’s called “rain” and apparently has something to do with the air, condensation and several other factors that I neither understand nor want to take valuable blog space to talk about. 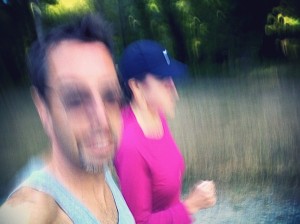 Apparently, though, rain is a fairly common occurrence in many parts of the world. It’s not so common here, however, as we were back to our blue sky selves today. A bit on the cool side with some wind, but none of that odd wet stuff.

It’s a little later than I normally post. Melinda and I just got back from a rare evening jog, deciding to add a short one to our Tuesday schedule. We walked from our house to a nearby trail, then jogged from it to the Erdre (river) and back. It was a little less than 20 minutes total so a pretty quick little run. A nice thing before dinner. I held out my cell phone camera to snap this picture as we were just starting out.

Earlier I walked with Chloe to her babysitting gig, this taking place after Melinda and I had met Ella at school and the three of us walking home together. Christine’s son Théo came over to watch the exciting tennis match on our TV since they don’t have cable at their house.

All in all, a pretty typical day.