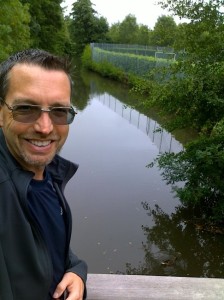 I made a quick dash over to the bank this afternoon, trying to time it so I could walk from the bank to Ella’s school to meet her at her dismissal time and then walk home. Turns out my timing was a bit off as I had about 15 minutes to kill. I realized this early enough in the walk to make a few detours, including this stop over a creek that runs east-west from the Erdre through the northern part of town. The trail along the creek has become a regular part of my run, as has this particular bridge. Given I was walking instead of running, I decided to stop and take a couple of pictures. Today’s photo is one result.

Also taking place today was a fine sushi lunch that Melinda, Chloe and I shared in town. Chloe is sad today, having learned last night that she won’t get to babysit Zacharie and Luce in July as was first planned. It turns out they can spend extra time with their grandparents. Chloe was very much looking forward to a month with them in which she had no homework or school obligations hanging over her head. She’s going to miss those kids a lot.

Last thing, a happy anniversary to Melinda’s parents, Dwight & Michele! We see Michele is celebrating by getting a Facebook page. Nice!