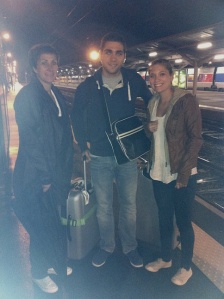 What I didn’t mention in yesterday’s post was the fact that when Melinda and Romain arrived at SeaTac Airport yesterday, they discovered that something was amiss with his scheduled flight. You know, the one for which he has had tickets for months. The short of it was fairly quickly determined. His flight had been cancelled. Now the airline was trying to accommodate a large number of stranded passengers.

To Romain’s advantage was the fact that he was a lone passenger, much easier to place on other flights. Still, the first option given him was to wait several hours at SeaTac and then fly to Boston for a 10 hour layover before catching a flight to Paris.

Um, you can do better than that, right?

Indeed. In the end, he left Seattle two hours later than originally planned and flew directly to London. He waited four hours in London and then flew to Paris. We are happy to report that he caught a Paris to Nantes train and was reunited with his whole family at our beloved train station in Nantes a little before midnight (3pm in Seattle) today, as evidenced in today’s photo, sent to me by Laurent.

If you haven’t, you might want to take a look at the blog Romain kept while he was in Seattle. In a word, it’s lovely.