This morning Melinda said to me, “Let’s get an early start on our errands and get them done quickly.” A great plan. Too bad it didn’t go as we wanted. 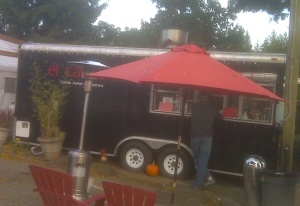 First, we had to wait to get started until after we picked up Ella from her overnight birthday party. That was 10:30. Then, errand number one, closing our safe deposit box, took much longer than what we thought it would. It was already past noon when we moved on to errand number two, which involved trying to buy me a vintage suit. We first tried the Goodwill in downtown Seattle. No go. Not even close. Then we tried the Value Village on Capital Hill. No go. And upon returning to the car we discovered we had been given a ticket. Our license tabs had expired and we had totally forgotten to renew them. That’s $47.

That’s $47 and a new errand to run, I mean, renewing the license. We arrived at the nearest licensing station 5 minutes after it closed, so set off across town to Ballard to another that is open much later. Because of construction, it took an eternity to get there. And once we arrived, we learned the car needs an emission test before we can renew the license. Thank goodness the kind clerk allowed us to reverse the order. But arriving at the emission station, we found it was closed.

What was left? Get some Mexican food at the taco truck in today’s photo and come home to write today’s post.