Who doesn’t like corn on the cob, right? It’s an American summertime staple. Cooked on the grill, bathed in olive oil with some salt and pepper for seasoning, it’s a treat! 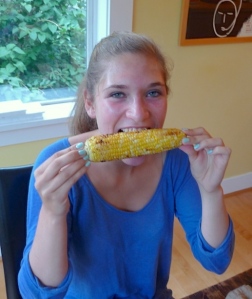 Manon got to experience corn on the cob cooked this way last night. She stopped long enough for me to take this picture of her, soon commenting, “I love” and that she hopes her parents fix it for her this way in France.

To answer your obvious question, she was neither an “around” or an “across” eater. She was more of a random biter. I’m sure with experience she’d develop a preference, but for now she ate her corn like the rookie she is.

Chloe, on the other hand, is a corn on the cob cheater. She grabbed a knife and cut the kernels off the cob before eating them, saying something about how she doesn’t like getting corn stuck in her teeth. Wah, wah, wah.

What’s the point of having corn on the cob if you cut it off the cob? I did not allow Manon to follow Chloe’s lead, of course.

One thought on “Corn on the Cob”