Melinda’s parents took the Boudeaus out for dinner tonight. They got back home about an hour ago and, boy, was Manon ever silly. 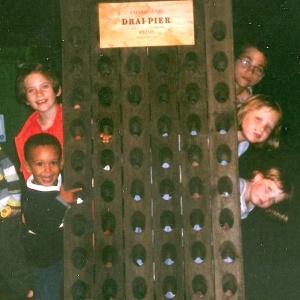 She kept trying to draw her mother into a tickle fight. All Frédérique could do was defend herself, punctuating her physical defenses with expressions in French that clearly were attempts to get Manon to stop:

It didn’t work. I told Manon that she was being silly, a word she didn’t understand. She went online to translate it and decided I was telling her she was being ridiculous and stupid.

I think she knew I wasn’t telling her she was being either of those things, but in her silly state she made it seem so. Ah, poor Manon.

To honor her silly state, here’s another picture from our trip to France in 2000. That’s Manon on the left with her cousin Alexandre below her. Romain is on top on the right, with Chloe & Ella below him. We were in Paris all having dinner together but the kids got a little bored. I took them outside for a little game-playing.

One thought on “Manon Can be Silly!”