I thought about calling this post “bad timing” but then I remembered a fable once told to me about a man who was driving, probably over the speed limit, to the airport to catch a plane. On his way, he got a flat tire. 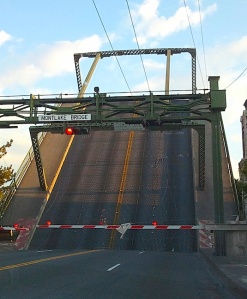 He got out to fix it, angry and frustrated, cursing the tire and his misfortune. He missed his plane.

Continuing on with his day, he heard on the news that a plane crashed and everyone on board died. Turns out it was the plane he was supposed to be on. He returned to the flat tire and kissed it, feeling blessed by his fortune.

So, yeah, on a handful of occasions lately I’ve been stopped for the raising of the Montlake Bridge, a drawbridge not far from our house. The most recent time, as evidenced in this picture, I was first in line, meaning I was “that close” to crossing the bridge before being stopped.

I’ve decided there is a lesson in this. Slow down. Relax. Enjoy the bonus time I’m getting in the car. In this recent one, the first in line time, I was with Melinda. What could be better than that, unplanned minutes for Melinda and me to enjoy each others’ company?