Yup, that’s Bob squeezing Melinda and me together in today’s photo. But you’d think I might show the back of Bob’s head, not his face, considering this post is called “Bob’s Back.” 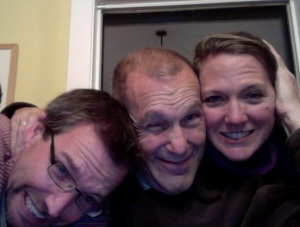 I’ve always thought that joke was kinda funny but it never gets the laugh I think it should. Like the time the students all stared at me like I was crazy when, upon a staff member’s return to school after being gone for a couple of days, I said, “Edd’s back! And, look, there’s his front, too!”

Same deal with Bob tonight. I told him about my idea for a band name. It would be for a group of people who, like most of us, are all obsessed with things being a certain way. You know, a little obsessive compulsive? The band would be the Obsessive Compulsive Disorder Committee. For short, they’d be OCDC. Say it out loud. It’s funny, right?

Bob just said it was clever. Not funny.

One thought on “Bob’s Back!”