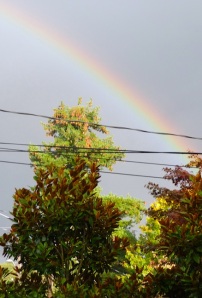 Actually, I know exactly where. I was standing in our driveway getting pelted by rain and hail when I took this picture this afternoon. It was pretty spectacular.

The rainbow appeared in the eastern sky at about the same time the hail hit. I grabbed the camera to see what I might be able to get photo-wise from inside the house, but nothing good came from that. So I dashed outside to take a couple of pictures and got this one. I know it’s not spectacular or anything, but having a rainbow outside your house is pretty cool.

What I was unable to capture was how bright it was and how big. It was a classic arch, the stereotypical rainbow, something a 5 year-old would draw in kindergarten.