Back in 1989 I moved in to the attic of this house in Renton, a city on the southern tip of Lake Washington, not far from Seattle. Renton’s longstanding claim to fame was it being the home of Boeing. 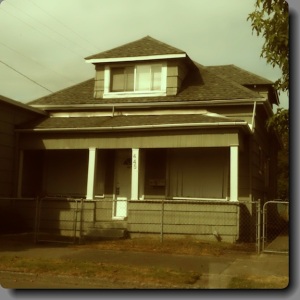 I was always drawn to it because of its close proximity to Longacres, the racetrack in Seattle that I grew up with.

Last Saturday I drove through Renton on my way to Ikea (to buy something for PSCS). I made it a point to drive past my old attic and I took a couple of photos, including this one.

I loved that place. It was cozy and old and all mine. It was inexpensive ($240/mo) and I lived there the year I completed my teacher training program.

We complement each other.