Here’s one more from my trip down memory lane to Renton a week and a half ago. 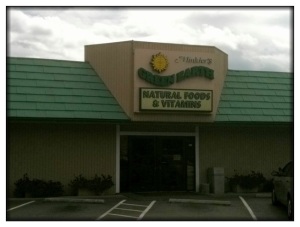 Back in 1988 when I first moved to Renton, I discovered Minkler’s Green Earth Nutrition, the local health food store. I went there regularly to get vitamins, healthy cookies, and an assortment of other things. One of the many things that sticks out in my mind about Minkler’s is the distinctive smell from inside the store. I always liked it.

So I dropped by while on memory lane, first to see if it was still there. It was so, of course, I went in. The smell? The same. In fact, it was so familiar that I felt a wave of nostalgia that mirrored feeling sad. Nutty.

Inside the store, a clerk was putting price tag stickers on new merchandise. That’s right, they don’t use barcodes and scanners.

At Gas Works Park, Just before the race began. 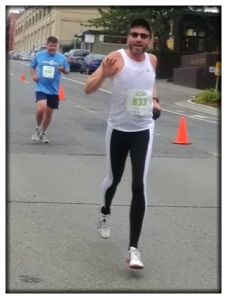 Just past the 4 mile mark…

Two years ago I ran the half for the first time, and last year I ran the full. About a month and half after that, I got hurt. The diagnosis was achilles tendonitis and the prescription was months of rest.

Late in April I started running short distances again, with only mild discomfort. It’s continued to get better since then, and I’ve managed to stretch out the distances of my training runs, usually stopping after 30 minutes or so to stretch.

Today I ran the 10K in just over 50 minutes, which came out to 8:05 minute miles. That’s fast for me (I had it in mind to average 9 minute miles, but the competition of running with others gets the best of me). More importantly, I didn’t feel the need to stop to stretch. 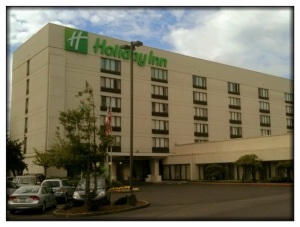 So yesterday I told you about my attic apartment in the city of Renton, the place I was living when Melinda and I first dated. I also mentioned that last Saturday I drove through Renton on my way to Ikea. Since I was by myself, I took the long way to Ikea by driving in and around my old neighborhood.

This drive took me to the Renton Holiday Inn, where, for a reason I don’t recall, Melinda had parked her car one early time she came to see me. I drove her back there that night and, inside my 1988 Mercury Tracer, leaned over and kissed her good night.

Our first kiss. In the parking lot. Of the Renton Holiday Inn.

So much so, I went home and immediately wrote a poem about it. Being the sap that I am, a couple of nights later I read that poem to Melinda. It’s hard to believe I didn’t scare her away!

Back in 1989 I moved in to the attic of this house in Renton, a city on the southern tip of Lake Washington, not far from Seattle. Renton’s longstanding claim to fame was it being the home of Boeing.

I was always drawn to it because of its close proximity to Longacres, the racetrack in Seattle that I grew up with.

Last Saturday I drove through Renton on my way to Ikea (to buy something for PSCS). I made it a point to drive past my old attic and I took a couple of photos, including this one.

I loved that place. It was cozy and old and all mine. It was inexpensive ($240/mo) and I lived there the year I completed my teacher training program.

We complement each other. 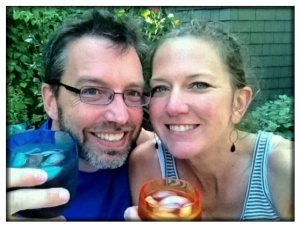 o ahead, try to make sense of this title. Concocktailtion. The big clue is finding the word cocktail. Find that, and then think concoction, and you’ll have it.

I concocted a cocktail on this lovely summer Saturday night for Melinda and me. It involved coconut vodka, which is saying something, something new. I told Melinda we needed to take a picture to send to our friends in France. And we both liked the picture enough to post it here.

It’s quite apt in the world in which I grew up, at least that part of my teenage years, to follow a post about my brother’s Gremlin with one about the disco demolition the Chicago White Sox baseball team held between doubleheaders in 1979. The ensuing fiasco was so great that the second game of the doubleheader had to be canceled. It was a landmark moment for a lot us, especially my brother Steve. 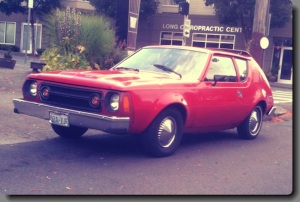 Remember your first car? Mine was a 1980 Chevy Nova, but it doesn’t stand out for me as much as the Gremlin, like the one in this picture, purchased by my brother Steve when he was 16 and I was 15. My Nova had been our family car before I got it. But Steve brought his Gremlin into the family himself, so it was all his.

As a 10th grader, I occasionally got to ride with Steve to school in the Gremlin. It had a unique smell, like the inside of a tire shop. More importantly, it had a cassette player built in. No more having to listen to whatever the deejay played.

The Gremlin playlist included Elvis Costello, the Ramones, Devo, and more. Devo’s Jocko Homo will forever be associated by me to that car.

Last Saturday, while driving in our Seattle neighborhood, I spotted this Gremlin. I made Melinda circle the block so I could get a picture to send to Steve. 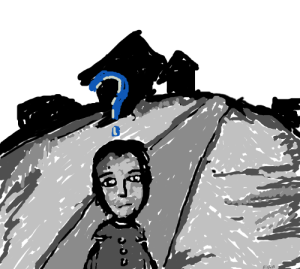 That’s the title of the pilot episode of The Twilight Zone, that fabulous TV show from the early 1960’s. Over the next three weeks I’m presenting one episode each week on the Kind Living Blog, starting with this one, and making a related kind action suggestion.

It’s part of what I call my online kindness classes that I’ve been offering for years.

Each Wednesday I’ll post a little inspiration related to that week’s message and then on Sunday, before announcing the next week’s episode, I’ll post my reflection comments on the concluding one. I think it could be a lot of fun, so click here to access the first episode.

Speaking of that first episode, you can buy an audio adaptation of it, if you like. A short story version of can be found in “Stories from the Twilight Zone.”

PS – Thanks to my kindness class artist Fish Astronaut for providing this image and the others I’ll be using!

That’s Elisa on the left and Alexandre on the right. They’re the daughter and son of Annabelle, who is Frédérique’s sister. You blog veterans may recall that 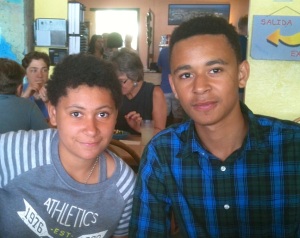 when Melinda, the girls, and I first moved to Nantes in July of 2010, we stayed for almost two weeks in Annabelle’s apartment while she and her kids were on vacation.

Well, last month while we were in Nantes, in fact, while we were longing next to the Boudeau’s pool, Annabelle told me that she was bringing Elisa and Alexandre to the US this month. Earlier this week they were in Chicago. Now they’re in Seattle for a couple of days. And they leave on Monday for a few days in San Francisco.

Melinda & I hosted a dinner last night, barbequing sausage and corn on the grill. I took Elisa and Alexandre to Ravenna Park to toss a Frisbee. Today Melinda took Elisa and Annabelle kayaking, followed by a Mexican lunch at Agua Verde (where I took this picture). Next up, it’s meeting up at Dwight’s & Michele’s to watch the Sounders FC game with their new star Clint Dempsey.

And then this one from last summer when the Boudeaus were in Seattle:
Manon Can be Silly! 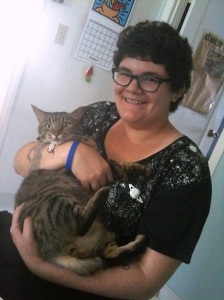 The title of the post is an inside joke that right now only makes sense to the young woman in the photo, Maddie, and me. Before explaining it so more people can be in on it, let me just say that back in June I made plans to travel to Olympia today (70 miles south of Seattle) to visit Maddie and see her house. You see, Maddie is a student at The Evergreen State College, where I went. Before that, she was a student at Puget Sound Community School, that I co-founded.

Maddie and I are connected.

So that’s Maddie’s cat in her arms here. And her cat’s name is Frances. At one point in our conversation today, Maddie said, and I quote, “France is the most important thing in my life.” At least that’s what I heard, a sentiment that makes sense to me.

I came to learn that what Maddie actually said is, and I quote, “Frances is the most important thing in my life.”