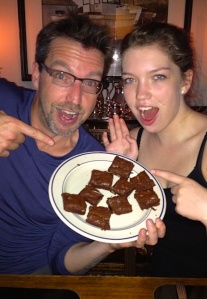 First, let me say that this photo is about an hour old. It was taken at Melinda’s parents’ house while in the midst of a text exchange with Melinda’s sister.

You see, we had a very spontaneous dinner at Melinda’s parents’ house tonight. Melinda, Ella and I were able to attend, but Brenda, Greg & Perrin (and Chloe) could not, all being out of town. So text messages were taking place between Melinda and Brenda about the delicious lentil & sausage soup, followed by brownies for dessert.

Brenda and family were on a ferry. So you know, it was one of those sister taunting things. We’re having brownies. How are the diesel fumes treating you?