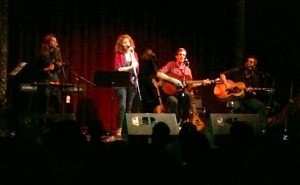 I like making music mixes for people (in fact, I’ll make a mix for anyone who makes a donation to PSCS – interested?). Back in the 80’s, I made mixes on cassette tapes. Now I make and post them on 8tracks.com.

One of my all-time favorite mixes I made a few years back. It was called, “Songs I Wish I’d Written For Melinda.” You see, in another life I am a songwriter for a popular band. And if you want know the truth, I’ve actually written several dozen songs. Well, the lyrics, at least. And in 1984 I worked with a singer and we collaborated on a few demos.

So this great mix I made for Melinda included all these fabulous love songs (you know how hard it is to write a love song without it sounding cheesy?), including one by a band named Hem called “Stupid Mouth Shut.” The song is basically about this person who should tell his (her) significant other that he loves her, but for some unknown reason he keeps his stupid mouth shut.

It’s a wonderful song. And On Wednesday night this week, Melinda and I saw the band that wrote the song in concert in Seattle. To our delight, they performed it. And I took this picture of them during the show.

Oh, Hem gained significant popularity because of this TV commercial.