Meet the new 12th man in Seattle. You might know her better as Celeste, but after watching the ENTIRE Seahawks game tonight, and it being a preseason game to boot, she is officially part of Seattle’s 12th man now. 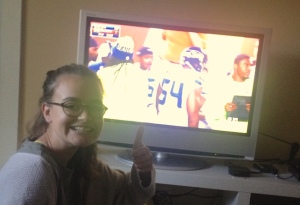 She understands what it means to be the 12th man, can explain the two minute warning, knows who Russell Wilson is, and can recognize Richard Sherman, even if she was to take a first aid class with him (take that Chloe & Ella Shaw).

I give her a pass on how to pronounce Kevin Pierre-Louis’ name, one of the Seahawks’ linebackers. 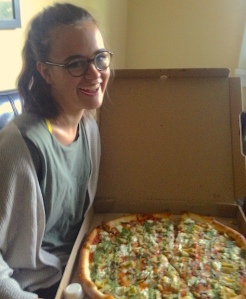 Not only did Celeste watch the entire preseason football game tonight, she made dinner. In this case, making dinner consisted of choosing which Pagliacci pizza we should order to eat while we watched the game. Celeste chose the Verde Primo and pronounced it good. I’ll give her a pass on this, too, both because I prefer having meat on my pizza and because the number of vegies on this one caused the crust to be a bit moist.

So, Theó, while your sister is soaking up American culture in Seattle, much like you were doing a year ago, what were you doing? How did you spend Friday night?

PS – The Seahawks lost the game, 14-13, but, as Celeste can tell you, it really didn’t matter because it was a preseason game.