Through our thoughts, actions, and attitudes, we are constantly planting seeds. What kind of seeds are we planting? 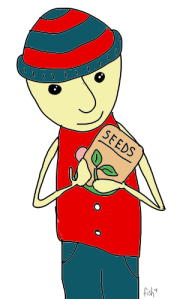 Six years ago I invited people to consider this question.

Each day, over ten consecutive days, and using inspiration through original drawings created for this activity by an artist named Fish Astronaut, I encouraged people to complete at least one mindful act of kindness each day.

By mindful, I meant the participants would be well aware of engaging in their acts in response to being involved in this activity. I told them that they could think about them and plan them in advance, or they could come upon them spontaneously. I just wanted them to be mindfully aware of their acts of kindness as they completed them, the mindful part being the fertilizer of their seeds.

Each day, I posted a new image of encouragement. I suggested these drawings were the water and the sun. 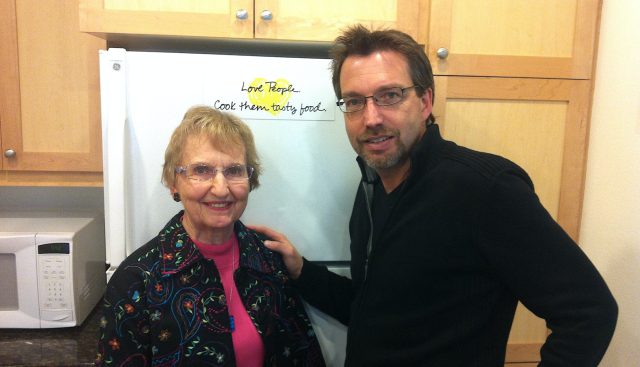 In a previous essay, I told the story of how I suffered from night terrors as a child. I subtitled that story, “I know the meaning of peace and serenity. It’s your mom lying down next to you and rubbing your back at 2am, moments after being so terribly scared.”

That subtitle is no small thing for me. While I don’t want to suggest that other people don’t have a deep connection to their mothers, especially my two brothers, there have been moments in my life in which my connection to my mother has a profundity to it beyond description, beyond what I think others have.

Most of these moments have been in what might best be described as ordinary interactions or activities. It’s like how we used to watch the old TV detective show “The Rockford Files” and seem to get a charge out of Jim Rockford’s humanism.

Then there are countless moments in which she’ll say something with a double meaning but not having initially recognized it. I’ll just look at her and cock my head to the side with eyebrows raised, hopeful that when she hits the rewind button and plays back what she just said she’ll hear the other meaning.

When she gets it, she will either laugh or yell out a flabbergasted, “Andy!” (assuming she doesn’t first use the beginnings of one of my brothers’ names, “Sc, St, Andy!”). When this happens in front of one or more of her grandchildren, it’s all the funnier. This is especially true if the double meaning is of, shall we say, a mature nature.

Like the time on Valentine’s Day back in 1980 when she pointed at the midsection of my 17 year-old brother who, as a decoration, had attached a construction paper red valentine’s day heart to his belt buckle. In front of a roomful of his friends, including his high school girlfriend, while pointing at his belt buckle, my mother blurted out, “You have a heart on!”

Go ahead, say it out loud while imagining you are pointing at the belt buckle of a post-pubescent male. Hear the double meaning?

If you still don’t get what it sounded like, understand that in the Pacific Northwest we often pronounce our T’s as D’s (this is especially true with double T’s - the city in which I live, Seattle, really sounds like SeaDDle).

My overall point here is that my mom is super sweet, super nice, and sometimes unintentionally super funny. It continues to be a privilege to be her son.

If you’re lucky like I am, you grew up in a neighborhood in which you had extended relationships with the people who lived near you. Borrowing from Mr. Rogers, it was always a wonderful day in the neighborhood in which I grew up. And I’ve come to think of this as having a lot to do with my mom. 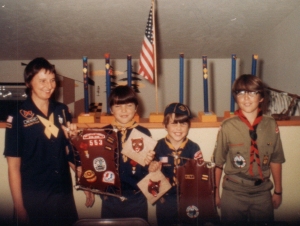 Ours was the house where the neighborhood kids gathered. Need a casserole, my mom’s got you. Flower baskets on May Day, my mom’s on the job. She was our Den Mother (that’s a Cub Scout reference), and along with my dad was the co-president of the PTA. She made many of our clothes and, I suspect, shared this expertise with Norma, Helen, Jan & Eunice, and any other mom in the neighborhood.

Heck, my parents sponsored the African-American family who moved onto the block in Nebraska where we lived in the 1960’s as part of an integration initiative. They served as godparents when the family’s younger child was born and stood up when a cross was burned on their lawn.

Maybe that act goes beyond the “ordinary acts of kindness” I referenced above. Still, I hope it gets to the core of my parents and, for the purposes of this story, my mom.

After my dad’s employer transferred him, and therefore the entire family, to the Seattle area in 1974, my mom’s altruistic efforts continued. With my brothers and me getting older, she focused more attention on church activities, volunteering as the church librarian and being available to others who needed something.

What’s remarkable about all of this as I reflect on it is that she engaged in her supportive activities with no need of recognition. To her, I think, it wasn’t about being kind or thoughtful or nice, it’s always been about being human.

I found myself thinking about my mom last spring when I was in Oakland with my wife, Melinda. We had moved to the Bay Area several months earlier as part of what some might call a mid-life crisis. I had stepped down from a job I had held for 24 years, the head of a school Melinda and I had founded in 1994. I was trying to figure out what was my next move at age 55. Melinda’s dad had passed away just a year earlier, the first of our parents to have died. He had grown up in Oakland and Melinda was drawn to tracing his roots while getting away from the drudgery of Seattle winters.

So there we were, along with our little dog, Bentsen, in a park in Oakland. I was discouraged from having just heard from a potential employer that the job I had applied for, and for which I felt well-suited, was going in a different direction. I had applied for over a dozen jobs at this point and this was the first one in which I had gotten past the screening process. I was excited by it for a number of reasons, among these being that it was a decent salary with good benefits and I wasn’t going to be in charge of the whole thing.

To relieve my disappointment, Melinda suggested we take Bentsen for a walk and pointed us to a large park on the water in Oakland. It was perfect, like finding an oasis. Bentsen was beside himself with joy, and the way the sun hit the water with a view of San Francisco across the Bay was glorious. Things didn’t seem so gloomy.

As happens, nature called. I mean, we had been at the park for quite a while and I was trying to meet that eight glasses of water per day protocol. I entered the public restroom in the park. The place was a mess. All over the bathroom were used paper towels and strips of toilet paper.

This is what got me thinking about my mother, who many years ago told me that one of her life practices was to pick up the strewn paper towels in public restrooms as a way to tidy the bathroom for the next person who comes. She said she wipes down the counter, too, making it look better.

Thinking about that, my attention turned to the subject of simple, kind acts people can do. I believe opportunities to complete them are being made available to us all the time, and I mean that literally. There is ALWAYS a kind thing we can be doing, even if it involves something as simple as a thought. 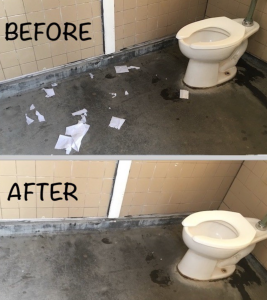 I proceeded to tidy up the bathroom.

In many ways, this was a small action. No one saw me do it and it didn’t take much effort. But maybe it wasn’t so small, after all. And this is where my mom’s example really started to kick in.

Thinking this way, I went on to imagine that this ripple extended further, that those people positively impacted by the man who encountered a clean public restroom were also nicer to others than they otherwise would have been.

I don’t think that’s such a ridiculous consideration. It’s also how powerful I think we are, and it can start with the simplest of acts. Like tidying up a public restroom.

So here I am, nearly a year later, writing about this. And I’m thinking about how many positive ripples my mom must have started, and at age 86, continues to start (she’s the building representative in my parents’ retirement community and among the many things she does is make sure everyone’s birthday is acknowledged).

How many positive ripples?

I don’t think there is a number that high.