This morning Melinda and I rented four bikes for the duration of our stay in Pornichet. We thought about renting a car and probably would have spent about the same amount of money on it as we did renting the bikes, but we like the exercise and positive environmental factors of bikes. While the girls relaxed and otherwise got ready this morning, 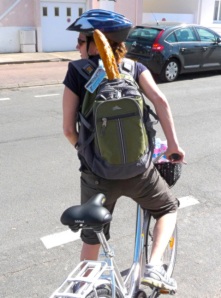 Melinda and I tested out two of the bikes by taking a ride to the grocery store and then the bakery. I thought it might feel a little more dangerous than it turned out to be, especially when inside the turnarounds used in Europe rather than 4 way stops (by the way, I think these are super-smart and should be used in the US). But it turned out to be a breeze, provided you use some common sense.

Here’s Melinda pulling away from me in front of the bakery. You can see she’s adapted to the French way of life because she has a baquette sticking up out of her pack. The rest is probably loaded with wine and cheese and lots of things beginning with the letter R.

Anyway, upon returning to our apartment (Melinda told me it’s an apartment, not a hotel), the girls were ready to go to the beach. Well, not quite ready. Chloe was ready. Ella had found an episode of “Friends” on TV in French so she & I took a few minutes to watch it. It’s a great way to improve one’s French (we saw part of the second Harry Potter movie in French last night). We soon took off for the beach and it took less than 15 minutes to get there. And we were pretty much sitting down the whole way! An added bonus — Melinda’s foot no longer hurts.

On a separate subject, Chloe & Ella have figured out how to access Facebook on our cell phones so you may want to check their pages for other updates. The text on the phones is too small for me to make use of them this way so I’m sticking to my blog postings and 15 morning minutes of connection.