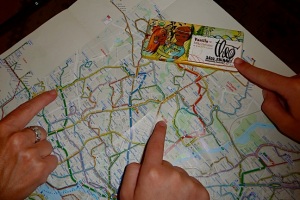 of Theo Chocolate, wanting to have some in France ourselves but, more importantly, wanting to give some as gifts. You see, the founders of Theo are parents of a PSCS student and we wanted to show off a bit. So we packed up some of the yummy chocolate and on three separate occasions delivered it as gifts.

The first gift was to the Boudeaus, giving them several pieces. The second was to Annabelle and her kids as part of our thank you for staying in their apartment when we first arrived. And the third batch was for our landlords when we first met them. As it turned out, all we had left for ourselves was one bar. I stashed it away and didn’t tell Melinda or the girls about it, finally bringing it out this past Thursday night after a quiet dinner at home. We then staged this photo, highlighting three of our favorite things. Melinda’s finger on the left points to where Ikea is on the Nantes map. In the center Ella is pointing to the word Nantes itself. And, of course, on the right is where Chloe is pointing to our remaining Theo chocolate bar, now long gone.

It was a fitting tribute to a wonderful first month in France.