For the second time this month, today workers all over for France went on a one day strike. They are rallying against a government plan to up the retirement age from 60 to 62. As I understand it, the age was lowered to 60 several years ago and moving it up again is seen by many to be unjust. 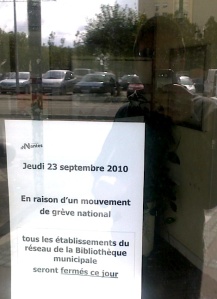 French president Nicolas Sarkozy says the age needs to be readjusted due to the economic situation in France.

The impact of these strikes can be pretty significant, which is the point, after all. They greatly impact public transportation in the country, nearly half of all the flights out of Paris were grounded, and many public schools shut down. In our case, I walked with Ella to school (and home again) because the number of trams running was greatly reduced. Chloe, too, had to scurry to get to and from school today. On top of that, our garbage wasn’t picked up and of great significance to me, and as I’m attempting to show you in today’s photo, the library branches were all closed. If you look carefully you can see me in the library door’s reflection, on which was taped a sign that read, “En raison d’un mouvement de grève national, tous les établissements du réseau de la Bibliothèque municipale seront fermés ce jour.”

Translation: Due to the national strike, all public library branches will be closed today.

On a happy note, we are pleased to be entertaining longtime Shaw family friends Marie-Pierre Koban and her daughter Martine from Seattle. Melinda grew up with Martine and took her first French lessons from Marie-Pierre, who is French but has lived in Seattle for years. They are in France visiting relatives and made a sojourn to Nantes to say hi.