Meet Melinda and Andy. That’s Melinda on the left, Andy on the right. As you can see, Melinda has quite the design flair, perhaps a certain elegance. Andy is not at all flashy, clearly plain but useful. 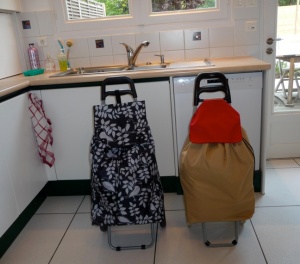 These are our “chariots,” or what we thought were called “chariots” until last night. They are used here in France by shoppers, mostly those who walk to and from the grocery store. You take your chariot to the store, check it somewhere while you shop, and when finished fill it with your purchased groceries. Then you head back home, pulling it behind you. We bought “Andy” soon after arriving in Nantes at one of those Fred Meyer-like stores. “Melinda” was purchased a week or two later at Ikea. I think you are getting the picture.

So last night we had dinner with our next door neighbors, Philippe and Cécile and their four children. The evening began with snacks and drinks in their living room, complete with conversation in both French and English. We learned, through a lot of laughter, that these “chariots” are used more by the elderly than anyone else, which got me feeling a bit, shall we say, more mature. Being “young” or at least “young at heart,” our neighbors couldn’t remember the name for what we had been calling our “chariots” but pointed out that a chariot is really a shopping cart. They tactfully pointed out that what we had is not something used by those our age and then proceeded to offer to drive us to the grocery store or even loan us their car. It was very sweet and kind.

After snacks and drinks last night, Philippe and Cécile treated us to a game of bowling at a nearby alley and then Chinese food at a nearby restaurant. This is another example of the kindness we’ve been shown since arriving in France.

Meanwhile, I still like my “chariot” and trips on the tram with it. Now I’ll better understand any muffled laughter I might hear. Maybe this qualifies me for membership in AARP and a discount at the movies?