Melinda and I grabbed the tram early this afternoon, thinking we’d head into town where Line 2 meets Line 1 and ride out to some of the shops at the end of Line 1. But as we neared the center of town, we saw a bunch of tables set up along the river with various things for sale on them. It was a French flea market! We hopped 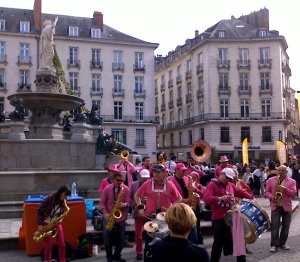 off and spent about 45 minutes looking. We discovered tables were set up on both sides of the river so we crossed over to the other side and looked there, too. Melinda bought a fancy old necklace for 3 Euros.

After looking through the flea market, we split a sandwich and got on Line 3 of the tram, riding it out to its far end, seeing places we had not seen before. Line 3 is the newest of the trams and it shows. Both the tracks and the trams themselves are pretty slick, quite modern. After getting off at the end of the line, we only had to wait a few minutes to start the ride back.

On our way back home we stopped off again in the center of town and followed the sound of a band playing. I swear, it was the perfect music for a Saturday in September. It sounded like a college band rallying the fans at a football game. We found the band, all dressed in pink shirts in front of the famous fountain at the Place Royale in Nantes. Next to the band was a huge tent with people giving out juice and pastries. I had a chocolate filled donut (or as we’ve come to say, “Pastry to the waistry.”).

It’s been that kind of Saturday. It’s chilly but sunny. Next up, we’re heading to dinner at the next door neighbor’s. A perfect weekend day.