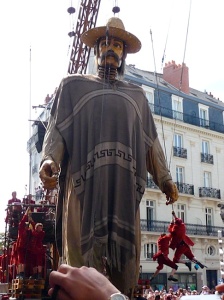 If this topic is boring any of you, tough. The spectacle of what is happening in Nantes this weekend is just too great for me to ignore. Add in that Melinda is in her absolute element and it’s a next to impossible for me to chronicle anything else. Forget that I’m posting late because we just returned from a fabulous BBQ dinner at neighbor John’s house (they have been SO kind to us). Forget that Chloe is babysitting and sent me several text messages asking that a dessert be delivered to her. Forget that I’m getting up early tomorrow to run with Laurent. Melinda and I spent 4 hours in town today watching various aspects of today’s Royal de Luxe show!

We arrived on a packed tram to see the girl (the small giant) get showered and changed. Her dog was anxious to get going but had to wait. Then the two walked to the waterfront to meet her uncle (the original giant) who was arriving by barge. We watched him come ashore and be transported into town, where he emerged from his cargo container. Ultimately, the dog, the girl and the giant arrived at the big cathedral in town. The dog arrived first, in time to uncover a garbage can and find something yummy in it. Then the girl arrived, much to the delight of the crowd. A few minutes later the famous giant arrived, walking down the street to arrive at the cathedral. He took a good long look, acknowledged the crowd, then sat down for an afternoon siesta. His handlers were appreciated with huge rounds of applause.

It’s really an astounding show, and on so many, many levels. There are literally thousands of spectators lining the streets to watch. Imagine a huge city-wide party with closed streets and interrupted routines, all to appreciate art and culture. So cool.