On the left in this picture is the abbey at Mont Saint-Michel in Normandy, our first stop last weekend on our tour of the Normandy region. 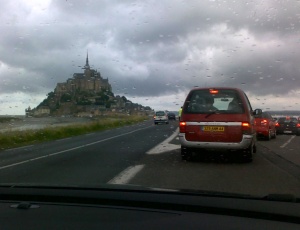 It’s quite spectacular and I encourage you to learn more through Wikipedia or this link.

As you can tell, it was raining (just lightly) as we arrived. It had just started to fall as we neared the abbey and since it was getting much darker outside than it had been, I thought it appropriate to start humming the theme to the Munsters TV show. I can’t be sure, but I think Melinda got a chuckle out of that.

After parking (by the way, that’s Bernard’s & Christine’s mini-van in front of us), we walked into what is the tiny town, built in circular fashion around the foot of the abbey. It’s unlike anything I have ever seen before. You wind your way around through the town toward the abbey, ultimately arriving and then paying your admission fee to enter. As you can imagine, it’s quite historical inside and the views are spectacular.