In French, a men’s suit is called a “costume,” something to give most English speakers a good chuckle. For instance, Melinda and I both think it’s pretty funny. And when my brother Scott, there on the right, shook Romain’s hand this morning and told him he looked quite nice, Melinda had to explain they were both in “costume.” 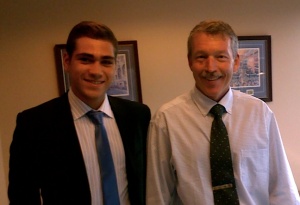 So, yes, Romain spent a couple of hours this morning shadowing my brother at his office on the 50th floor of a skyscraper in Seattle. Scott is a stock broker and has been for quite some time. I think Romain was impressed by many things, including the corner office with its incredible view.

Several months ago I had mentioned to the Boudeaus that it might be possible for Romain to spend some time with Scott if he came back to Seattle with us. That was what started the whole idea of Romain coming, and lead to us helping set up other tours and visits for Romain. For instance, yesterday he spent several hours at Microsoft with our good friend, Anoo, a former Microsoft employee as well as a former teacher at PSCS.

But you should really hear more about this from Romain on his blog.