I’m noticing the distinctive “French” items in the various stores where we typically shop. I’m not sure if the stores had so many France-inspired things before we left. But now that we’re back, these particularly products are certainly standing out for me. 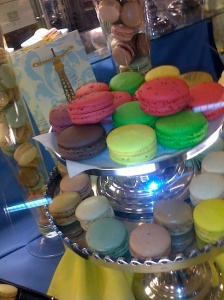 Case in point, today’s photo. Before living in France I can say with certainty that I did not know what a macaron was. I can also say that if I had seen one in the United States before we left, I have no recollection of it. The closest thing I can think of is one of those little gummy erasers shaped like a cheeseburger. And, senator, that’s no macaron.

I took this picture over the weekend at Metropolitan Market, a grocery store not far from our house. They are having a sale this month on macarons, 99 cents each instead of $1.49. I bought two of each flavor, having come to love them in France (Dana B brought us some from Paris that were incredible). These from Met Market were quite good, meaning I may buy some more before the end of the month.

From a reflection standpoint, I’m not sure how to sum this up. Here I’ve found something that reminds me of France, a good thing. But on sale at 99 cents a pop? That can put a dent in my American pocketbook.