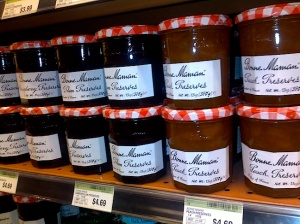 So yesterday I wrote about macarons. I’m continuing with the theme of French products we can find in the United States (or at least Seattle), this time on the subject of jam.

Back on February 2, I wrote about La Chandeleur or Crêpe Day in France. I included a photo of the Bonne Maman jam we used to make our crêpes back then, pointing out that it was on sale for about 90 American cents per jar (and this was for the extended jar). So when I spotted this display at Metropolitan Market of Bonne Maman jam for $4.69 per jar, I figured I should take a picture and post about it.

Of course, not all products are this much cheaper in France than in the US. But it does seem that just about everything is cheaper over there, especially bread, cheese and wine. This got Melinda to wondering if it might just be a psychological thing, given we were paying in Euros in France and the Euro was quite strong in relationship to the dollar throughout our stay. For instance, that 90 American cent extended size jar of Bonne Maman jam was listed as .62 centimes.