So at the end of our fancy Italian meal last night, the one we were treated to by Romain, we asked him what he’d like to tonight, his final evening in Seattle. Without hesitation he said he wanted to return to the Mexican restaurant in Ballard where we went on August 5th. 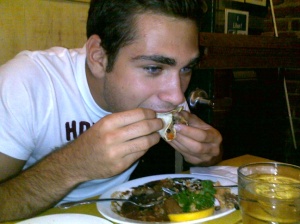 For the sake of accuracy, I made a point to get the name of the restaurant this time. Just don’t ask me to pronounce it… It’s spelled “La Carta de Oaxaca,” and I think the X sounds like a W or something. And I thought the French R was difficult. Whew. Anyway, you can learn more about the restaurant at its website.

I caught Romain in mid-bite of his Lamb Birria with this photo. He wanted to make sure he ate something that came with the restaurant’s delicious homemade corn tortillas. I think he was quite satisfied with this choice. When I asked him what he thought of the meal he said, “I love.”

I asked him if he would miss Mexican food once he was back home and he said yes, but that he would miss other things more. I think he was referring to us. It was such a sweet thing to say.

We will certainly be missing him, too.

One thought on “Our Last Night w/Romain”