I spent most of the day with my parents (that’s my mom with me in today’s photo). About two weeks ago my dad fell while on a hike. After a visit to his doctor to see what was up, it was determined he should see a cardiologist, which he did yesterday. 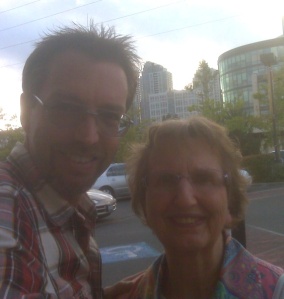 The cardiologist discovered his heart wasn’t beating as it should and recommended a pacemaker be implanted, scheduling the surgery for today, less than 24 hours after seeing him. I met my parents at the hospital just before my dad was wheeled in to surgery, and then spent the rest of the day with them there.

To cut to the important part of the story, everything is fine, exceptionally fine, in fact. My dad returned from surgery not only awake and alert, but lucid enough to joke with the nurse that what he’d really like in terms of pain medication was a beer (okay, to be honest, he referred to it as a “microbrew”). Shortly after that he was able to take himself to the bathroom. And by the evening, after he had devoured a dinner, we watched a very entertaining Seattle Mariners baseball game (and “entertaining” and “Seattle Mariners” have not been used in the same sentence much around here lately).

I took this picture with my borrowed cellphone, trying to capture some of the Bellevue city skyline behind us. My mom and I had walked across the street from the hospital to grab a bite to eat at Whole Foods. Having not been in Bellevue for well over a year, I was stunned by the changes.

3 thoughts on “Setting the Pace”