One bonus to Chloe attending college in Canada is the fact that Canada is a bilingual country and the two languages featured are English and French. As we entered the border crossing area on Friday we were excited to have this made quite plain to us and took a picture of this sign (and a couple of others, too). 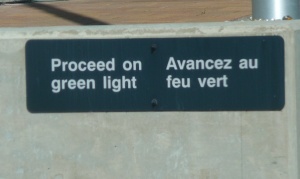 Having both languages side by side this like is kind of like having Google Translator right there on the signs. I could have used this kind of thing in France.

Another thing Chloe liked was the return to the metric system after we crossed the border, further harkening us back to France. Speed limit signs and distances are in kilometers and temperatures are in Celsius. Melinda and I both smiled on Saturday morning when Jenny, wife of my cousin Eric and whose house we stayed at Friday night, mentioned it might reach 30 degrees over the weekend. That’s hot!

Say, I just got an email from Chloe and guess what. Her Canadian cell phone isn’t working. What is it with us and foreign cell phones? We went in on Friday and tried setting her up with the simplest of prepaid plans, text messages only. The service didn’t come on in the allotted time so Melinda and I went back on Saturday and started the process all over again, assured it would work this time.