I’m sitting back late this afternoon listening to the brand new record by one of my favorite performers, Nick Lowe. I came home from school to find it had arrived in my Amazon order (along with some “bars” – more on those in a second). 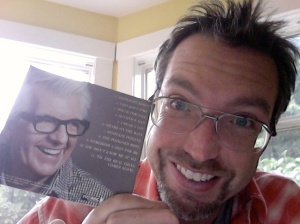 I’ve been listening to Nick Lowe since the 1970’s, after I learned he was the producer of all the early Elvis Costello records. Being such a big fan of Elvis, I decided I should listen to Nick Lowe. No disappointment there.

This record is called “The Old Magic” and is perfect if you like to listen to an eminently cool 62 year-old sing modern pop ballads that recall aspects of the music of the 50s and 60s. It’s splendid, just like all of his recent releases.

Now about those bars (which, perhaps, deserve a blog post all their own). I have a great likeness for health food bars and I find the best prices at Amazon. In France, I missed having the variety we find in the states. So my order from Amazon today included the new Nick Lowe record and these three things:

So there you go!