This has to be the oldest photo I’ve used on this blog. It’s from 1994 and the cute little, runny-nosed girl on the left is a 1 year-old Chloe. Playing with her is our friend Lynn Shelton, for whom today’s post is named. Since 1994 Lynn has become quite famous, it seems. 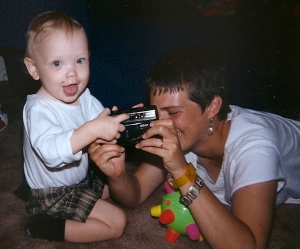 She’s a filmmaker whose latest film, Your Sister’s Sister was just picked up for distribution and will be released in the US next year. Woo-hoo!

Learn more by reading this story on the Hollywood Reporter website.

Given Lynn’s growing fame, I’m proud to say that back in 2003 she interviewed me on film and used part of it for a documentary she made on education. In fact, part of the documentary was about PSCS! You can view that short film on YouTube.

Back in 1994 Lynn and her husband, former MTV VJ Kevin Seal, were living in New York. They came back to town on family business and stopped off to spend some time with us (you may recall that Kevin is 50% responsible for Melinda and me meeting). Lynn had this tiny camera with her and took a bunch of adorable B&W pictures of Chloe that she later made into a book for her. So, so creative and so, so cute.