Every year, Melinda’s sister Brenda and her husband Greg (Perrin’s parents) have invited Chloe and Ella over to their house to celebrate what has become a family Halloween tradition, Pumpkin Weekend! It involves heading over on Saturday afternoon, picking up pumpkins, carving them, having dinner, watching scary movies and spending the night. 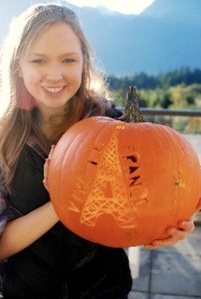 This has gone on for years and when the girls were young served as a night out for Melinda and me. Of course, last year was interrupted by our year in France. But Ella is excited to be back at it, with Pumpkin Weekend scheduled for next weekend.

Not to be outdone, apparently, Chloe participated in something she called Pumpkin Weekend up at Quest University. I’m not sure how she can call it that, but that’s what she has done. She just sent me several photos from the event, including this one. I can see the France influence is live and strong.

Speaking of Chloe, she continues to report being happy at school. She’s involved in her second “block,” a 3 1/2 week long class, this one on rhetoric. It’s supposed to bring the freshmen to their knees. I guess that happened to Chloe yesterday, but that may have been more due to the food poisoning she reported knocked her down last night and today.

I can safely report that there has been nary a case of food poisoning from Pumpkin Weekend in Seattle.

One thought on “Chloe’s Pumpkin Weekend!”