Yes, it was Day Three for me on the jury and I found the whole process immensely fascinating. I mentioned I’m part of a civil trial which, I think, are a lot less glamorous than criminal trials. For instance, in the courtroom next to ours we all saw a couple of people come and go in handcuffs. Nothing like that in our courtroom. 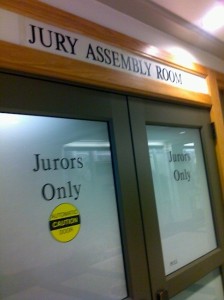 Still, it’s really interesting. For instance, we were due back after lunch at 1:15 but were kept in the deliberating room (with its view of Smith Tower – see yesterday) until 2:30. I can only imagine what was going on in the courtroom. I think it had to do with a disagreement over the wording in the jury instructions we were to receive before the lawyers made their closing statements.

Speaking of which, the closing statements were finally made and tomorrow morning the case is turned over to us, the jury. Before that, however, one of us will be picked at random to be excused. Since we have 13 jurors hearing the case and only 12 are needed to deliberate and reach a decision (the 13th is present in case of illness), one will be sent home first thing in the morning.

At this point, having been present for everything else, I really don’t want it to be me!