First off, can you believe tonight’s World Series baseball game? It’s like how I used to act out a World Series game when I was a kid! Crazy. 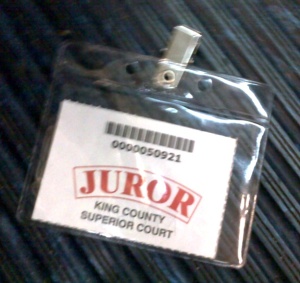 So, yes, my jury duty responsibility wrapped up today. We all arrived just before 9am to find our notepads and jury instructions on the table in the deliberation room. We soon learned which of us was named the alternate (not me!) and she left. Then a foreman was selected (me!).

The deliberation was difficult. The challenge had to do with the issue being injuries sustained during a car accident, BUT the injured party was in a second accident two days after the first. We were being asked to determine an apportionment of injury from EACH accident, although the defendant in our case was the driver who caused the first accident. Sound complicated? It was.

We talked through the morning, wrestling mainly with the question of whether or not the defense met their burden of apportioning the percentage due each accident. People were on both sides of this fence. But we came to a decision by 2:30, it was read in court, and we were dismissed. Another juror and I spent another 45 minutes debriefing the trial with the lawyers from both sides. Boy, that was fascinating!

In fact, the whole thing was fascinating!

One piece of advice – don’t get into a car accident.

One thought on “Wrapping Up Jury Duty”