On my Sunday morning running route I pass by an intersection with this fire hydrant near the corner. Each time I run past it I smile, as it reminds me of one of my great France stories. 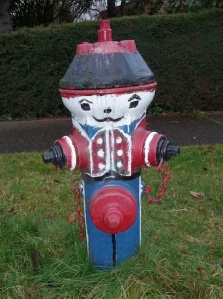 Finally, I grabbed a camera a couple of days ago and went out to take a picture of it, knowing I’d post it here.

Why this interest in fire hydrants and why would this one make me think of France?

Well, early on during our year in France, back on 27 July 2010 in Pornichet, I blogged about how sexy I thought the French fire hydrants were. This created quite a joke among Laurent, Frédérique and some of their friends. So later, in September, when there was an entire exhibit of French fire hydrants in Nantes I had to write a post about it.

4 thoughts on “An American Fire Hydrant”