Translated from French, today’s blog post title is “My Father-in-law.” Translated literally, it’s “My beautiful father.” That’s a pretty cool literal translation, don’t you think? And mother-in-law is “belle-mère,” as in beautiful mother. Sometimes languages can be such fun. 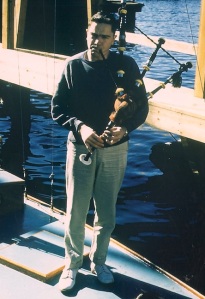 Anyway, I’m writing about my “beau-père” because today is his, Dwight’s, 78th birthday. Happy birthday, Dwight! I went digging in the photo archives for an apt shot to illustrate today’s entry and found this one. There he is, young Dwight, maybe before he was Melinda’s dad, playing the bagpipes. That’s a pretty cool instrument to play, the bagpipes. Way back in 1994 Dwight came in to PSCS (actually, PSCS came to him – the class met at his house) to teach a group of teenagers how to play the bagpipes. His creativity in teaching the class became one of my favorite stories from that school year, the school’s first.

Dwight designed a way for all the students to have their own bagpipes. They made them, following his directions. The bag used to hold air was the most ingenious part of the apparatus. Each one was made from a turkey oven roaster bag.

Here’s to you, Dwight!