Note – I wrote this yesterday at SeaTac and tried to post it so there would be a first post on the new blog site for you all to see. Lo and behold, the Internet connection at SeaTac was spotty so it didn’t get posted. I decided to post it anyway, even though we’re now at the Boudeaus in Nantes. 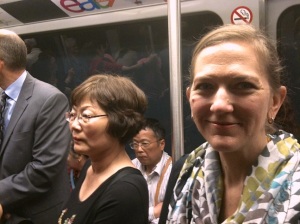 Bet I scared you with that post title, eh? Actually, for Melinda and me it just turned out to be a minor inconvenience. For those behind us, it’s probably a pretty big deal.

Anyway, “unavoidable delay” was the phrase that came over the loudspeaker in the shuttle that took us from the main terminal to the “S” gates at SeaTac. It came on just after the shuttle came to a stop, about three feet shy of its proper stopping spot. What made it somehow less concerning was that it was a recording.

I mean if the airport has to record an “unavoidable delay” message, it must happen pretty regularly, right?

So we stood on the packed shuttle for 10 minutes or so, long enough for me to take this picture of Melinda and for a worker to squeeze open a door to get on. Soon thereafter, the shuttle moved those final three feet. Still, though, I had to activate the emergency switch on the door to get it to open.

Once in the “S” gates we heard a not recorded message announcing that trouble was being had with the shuttle and no one could get to the “B” gates.

“B gates.” Now you’d think something with the name “B gates” would have some pull in Seattle…