Translation : She has 18 years! Elle a = she has, but it also sounds like Ella! Ella is 18! That’s just crazy talk, I know. I remember when she was born, like it was, well, maybe not yesterday. But not 18 years ago!

To celebrate, we came to Paris, just like we did in 2011 when Chloe turned 18. Back then, we were living in France and just had to travel by train from Nantes. This time we had to come all the way from Seattle.

But Melinda and I are pleased to have now celebrated both of our girls’ 18th birthdays in Paris. Here in France, at 18, they are fully adults. In fact, tonight the four of us split a bottle of champagne AND a bottle of wine at a restaurant! And after that, Chloe took Ella to a bar, just the two of them! She said something to the effect of, “I can’t be in Paris with my little sister on her 18th birthday and not take her out for a drink!”

It’s just past 11pm as I write this and to assure the grandmothers, everyone is now back in our apartment in the Marais, tucked into bed, safe and sound. But how did the day unfold? 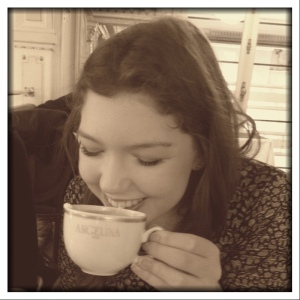 To be honest, it began with a pretty significant PSCS focus. Back in Seattle, the students were signing up for their winter term classes today so Melinda had to get all the data entered in the school database. She got up early to do that so it would all be ready for them. After that, at about noon in Paris, Ella, Chloe, Melinda, and I took the Métro to Angelina’s to get some hot chocolate. As far as Ella’s concerned, it’s the best hot chocolate in the world and we were definitely going to have some on her 18th birthday, just like we did four years ago on her 14th. We took our time and savored the drink, which is really more like chocolate soup. It really is something.

From there, we headed over to the Eiffel Tower where we just played around for a long time taking all kinds of photos. We arrived at the north end and made our way to the south, all four of us busy snapping photos at various points along the way. At the southernmost point we were asked by a man to take his photo. In return, he took ours on Chloe’s phone. We were pleased with the result, much better than the “groupie” we tried ourselves. 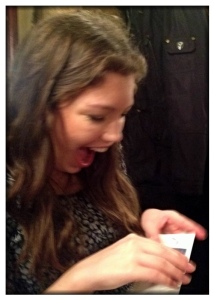 After the Eiffel Tower, we decided to take a bus around Paris. Our destination was intended to be a jewelry store near the Opéra, but we started off in the wrong direction. No problem, though. The driver explained (in French) to Melinda the proper way to go so off we went. All in all, we spent a little more than an hour on buses in Paris, getting to see some of the great holiday sights along the way. Not bad at all.

For dinner, we had made reservations at Robert et Louise, a restaurant just a couple of blocks from our apartment that had excellent reviews.

They knew it was Ella’s 18th birthday and took great care of us. We had a champagne toast to begin (Ella says she likes good French champagne – go figure) and a bottle of red wine with dinner. Speaking of dinner, Ella and I both had confit de canard so you know we are pleased. After the dinner dishes were cleared, the owner dimmed the lights, made a big announcement in both French and English, and brought Ella a piece of chocolate cake with a candle while everyone on the floor, patrons and workers alike, sang happy birthday to her in French. Me, the proud papa, I topped it off with a Poire, my digestif of choice. From there, Chloe took Ella out for her first legal adult beverage sans parents.

So what do you think about this, Melinda and me no longer having children? According to Chloe, we now have adults.

From the sabbatical year: