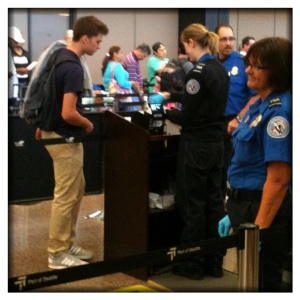 So said the text I received from Théo as Melinda and I were driving away from SeaTac late this morning and he was seated at the departure gate awaiting his flight to Amsterdam, from where he will fly to Nantes and home.

Our eyes were a bit moist as we hugged our French son and bid goodbye, pausing afterwards for a few minutes to watch him pass through airport security. The last two weeks at home have been absolutely lovely, in no small part because of Théo’s presence.

As we’ve experienced in each of the last four years (Romain in 2011, Manon and the Boudeaus in 2012, and the Bertails in 2013), having a French connection join us in Seattle extends our trip to France.

If I could wave a magic wand and provide Théo the greatest experience he could want while in the US, I think it would be for him to see an NBA game. Given it’s the off-season for the NBA and that Seattle no longer has a team and it would take a magic wand with sizeable power. So what happened late last night? Théo discovered that Seattle resident and NBA All-Star Jamal Crawford had organized a midnight game for a few of his friends, including All-Star point guard Chris Paul. The game was being promoted on social media. We learned it would be taking place at Seattle Pacific University and that it was free. Additional rumors included that other NBA players would be participating, including Blake Griffin (Théo was wearing a Griffin jersey). Like I said, the game was slated to start at midnight and doors to the small arena would open at 11:15pm. At 9:45 Théo and I left the house to see if we could get in. We arrived at 10 and stood in line with other hopefuls, wondering all along if we would be among the lucky few. Excitement in the crowd swelled when through a set a windows to our right we saw Chris Paul in a weight room warming up. He was no more than 15 yards from us! Théo squatted to take a picture. Just past 11:15, the line started to move. We kept our fingers crossed as we moved forward, soon finding ourselves in the brightly lit arena, 8 rows up from the floor, and with goofy expressions on our faces. The game started at about 12:15am, and while Blake Griffin never did arrive, we were treated to some incredible basketball just a few feet away. Several NBA players performed, but the highlight player may have been a 17 year-old Seattle high school player who attends the same high school that Jamal Crawford attended. The two put on some epic one-on-one battles during the game with the kid, nicknamed Baby Boy, often getting the best of Crawford.

At 2am we left the arena and headed home, those goofy expressions still on our faces.

Melinda, Chloe, Ella, Chloe*, and I took Théo to a Seattle Sounders FC soccer match tonight. On the way home we stopped at the grocery store to pick up the ingredients for root beer floats. Théo said he enjoyed being in a grocery store at 10pm and, as you can see, thoroughly enjoyed seeing the Seahawks paraphernalia in front of the cheap beer. Melinda took a picture so his parents can be proud of his budding Americanism.

About that soccer game, the Sounders played the San Jose Earthquakes and were heavily favored to win. Instead, the two teams battled to a 1-1 tie. The game was actually a little frustrating for Sounders fans. They outplayed San Jose, but were tied 0-0 at the half.

During the intermission, Théo and I hustled down to the concessions to get cheeseburgers, garlic fries, and root beer (more American training), returning to our seats in time to see Seattle score a goal in the first minute of the second half (during the only time during the whole match that we were seated). They completely controlled the play after that, up until San Jose scored 20 minutes later on a fairly cheap goal. Despite a plethora of chances and shots, the Sounders could not regain the lead.

On Théo’s training, I believe he videotaped the playing of the American national anthem before the match began.

Today’s moral – It turns out that some Calvados cocktails taste better when you don’t drink them yourself.

It’s been a busy PSCS day for Melinda and me, complete with a board meeting that took place from 6-9pm. As such, we really didn’t see a lot of Théo today and I don’t have a new picture of him. Ella and Chloe* took him to the beach and then, after plying him with hot dogs for dinner, took him to see a movie. After the board meeting, Melinda and I stopped in at Frank’s for a light meal and a cocktail. We’ve gone often enough that the bartender recognizes us and extends us the kindness of appearing to be glad to see us when we come in. We went in tonight after several weeks absence, most of which happened because we’ve been in France, as you know.

Speaking of France, soon before leaving Melinda couldn’t find her fancy new Ray-Ban sunglasses. She turned the house upside down, PSCS upside down, both cars upside down. They were not to be found and she was distressed. She gave up finding them…

So, like I said, we went to Frank’s tonight. Upon arriving, the bartender greeted us warmly and then hustled into a backroom. He came back with this statement, “You didn’t by chance leave a pair of sunglasses here last time you were in, did you?” He had found them after we had left last time and, not wanting to put a pair of Ray-Bans in the Lost & Found, had tucked them away for when we returned. It was a spectacularly kind and thoughtful thing for him to do and Melinda was visibly touched.

Glowing from this exchange, I asked the bartender if he knew of any Calvados cocktails. Calvados, as you may know, is an apple brandy from Normandy in France. I am so taken by it that while in Normandy this year Théo’s dad, Bernard, took me to a farm where a man makes his own. We got to sample it and Bernard made sure I came home with a 10 year-old bottle of the best. Anyway, the bartender at Frank’s tonight recommended a Widow’s Kiss, pronouncing it his favorite cocktail. I accepted his suggestion and a few minutes later he came back with it. In a word, incredible. In four words, it’s MY favorite cocktail!

We added oysters, a salad, and some deviled eggs to our evening snack and sat back reviewing the prior 15 minutes or so — Melinda’s sunglasses, Frank’s, Calvados, oysters. We wanted to find a gesture to match what we were feeling.

Having completed our snack and cocktails, we drove home, picked up the 10 year-old bottle of Calvados, then returned to Frank’s and presented it as a gift to the bartender.