Chloe told me after yesterday’s blog posting that she and Ella have been noticeably absent from the blog lately. I said that since she really doesn’t let me take a lot of pictures of her, and those I do take she rarely wants made public, it’s hard to post one to the blog. But to be fair, she’s right. The real reason is that Chloe and, to a certain extent, Ella have been doing their own thing while Melinda and I head out each day. 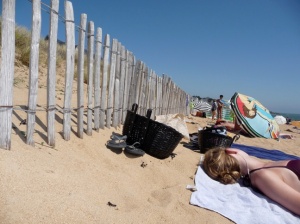 Chloe prefers to sit by the pool over going to the bakery or market, and Ella likes reading in the apartment. Speaking of swimming pools, Ella sees their purpose as being a place to swim and play while Chloe sees them as something you lay next to.

Regarding the girls, both spent all day on Tuesday with Manon and her friend Camille who lives in Pornichet year round. Camille guided the four girls by bike to the beach at La Baule where they met up with some other teenagers. Chloe went with them again yesterday, this time to the beach at Pornichet.

Today’s photo comes from Monday when the four of us rode to a different part of the Pornichet beach. Melinda took several pictures of this cool, weathered fence that was just behind us. So here you go, Chloe. You’re in this photo, along with the fence, two of our bike baskets, Melinda’s flip flops and Ella’s blue towel. Where’s Ella? With me in the ocean jumping waves, which seems so much more reasonable than laying in the sun.