Bear with me a minute before I make sense of today’s blog post title. First, here is another photo of Melinda, this one from today and our visit to the mall in Nantes I lovingly refer to as “Bellevue Square.” 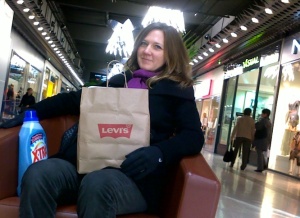 As I’ve mentioned before, I’ve given some of the shopping centers here in Nantes Seattle-area nicknames. The one closest to our house is Northgate, both because of its proximity to our house and because of its look (I think it has something to do with the lighting). The one further from our house that takes a tram and a bus to get to (or some extra walking) is Southcenter, for the simple reason of the time it takes to get there. And then the fancy one, where we were today and the locale for today’s photo, is Bellevue Square. It earned its nickname for being by far and away the most upscale of the malls in Nantes. For you France purists, the *real* name of this mall is Beaulieu.

Okay, the blog title. So Melinda and I were wandering through the mall when our ears picked up the mall music being played. I have no idea who did the programming, but whoever it was certainly had a thing for over-the-top pop music from the 1980’s. Catching the tune, I said to Melinda, “If I was putting together a playlist of songs I’d least likely expect to hear in France, Kajagoogoo’s ‘Too Shy’ would certainly make the list.”

For those of you that survived the 80’s and need a refresher, here’s a link to the music video which I hereby dedicate to my brother Steve, given today is his 49th birthday.