That’s a line used several times by Kurt Vonnegut in his nonfiction writing. He explains, though, that its origin is his uncle Alex, of whom Vonnegut wrote, “And his principal complaint about other human beings was that they so seldom noticed it when they were happy. 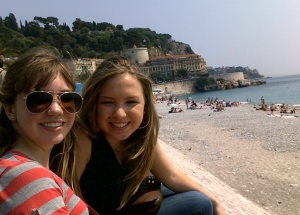 So when we were drinking lemonade under an apple tree in the summer, say, and talking lazily about this and that, almost buzzing like honeybees, Uncle Alex would suddenly interrupt the agreeable blather to exclaim, ‘If this isn’t nice, I don’t know what is.”’

Let me just say that the line, as important as it has been to me in the past, so much so that I have said it multiple times during our sabbatical, has never been as a poignant as it is right now. Here in Nice today we spent much time at the beach (note, I’m using a photo I took at the beach yesterday instead of one from today in swimming suits – I know where my bread is buttered, if you know what I mean). So tell me, can you imagine a better time than sitting with your family on a beach in the French Riviera?

Here’s more from that Vonnegut essay (which you really should go read yourself, especially you, Steve Miranda), “So I do the same now, and so do my kids and grandkids. And I urge you to please notice when you are happy, and exclaim or murmur or think at some point, ‘If this isn’t nice, I don’t know what is.'”